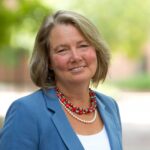 “Professor Laura Little has written one of the most interesting, original, and entertaining books that I have read in a long time. She examines how humor is treated by the law in a serious and careful manner, but at the same time reveals the humor about the law in cartoons and jokes. I learned a great deal from the book and also no book about law has caused me to laugh so much.
~ Erwin Chemerinsky, Dean and Jesse H. Choper Distinguished Professor of Law, University of California, Berkeley School of Law

In addition to her work on the American Law Institute’s Restatement on Conflict of Laws, her solo-edited casebook on the same subject, and her more traditional legal scholarship, Professor Laura Little has just published Guilty Pleasures: Comedy and Law in America. The book, which includes a foreword by Bob Mankoff, former cartoon editor for the New Yorker magazine, has received glowing reviews from comedians and legal scholars alike. We checked in with Professor Little about why she wrote Guilty Pleasures and what readers will find inside.

TLS: Tell us about the book – it’s getting rave reviews from some pretty funny people, which seems unique for work by a legal scholar.

Professor Little: The book is the culmination of many years of studying how law and humor intersect. Some of this work involves legal analysis of how law regulates humor: identifying what type of humor law protects and what types of humor law discourages, stifles, or punishes. Some of the work in preparing the book was simply looking out for funny cases, funny contracts, funny wills, funny court transcripts, and the like. The book also surveys humor about the law – such as lawyer jokes. I’m not a fan of lawyer jokes: they are an overworked trope. But their popularity reflects important lessons for how our society views lawyers and the legal process.

The book therefore comes at the topic from many angles. It has something for everyone, including 75 New Yorker cartoons and lots of jokes.

“If all law books were this funny and entertaining, I might have listened to my parents when they were pressuring me to go to law school.”
~Andy Borowitz, New Yorker columnist and comedian

TLS: What inspired you to write Guilty Pleasures?

Professor Little: I love to write and love this subject. Once I was able to negotiate for the New Yorker cartoons, it seemed a natural project. Writing the book was a welcome break from the highly abstract, technical material I generally work with.

TLS: What’s the story behind the title?

Professor Little: I had suggested the title during a brain-storming session with the Editor-in-Chief of Oxford University Press. He loved the idea, and I was resistant. I feared the title evoked salacious images I didn’t necessarily want associated with my work. That turned out to hold some truth— at one point the algorithm on Amazon paired the book with … shall we say … an unsavory product. But the algorithm has been changed and I’ve come to like the title. The enterprise of studying comedy, after all, is my guilty pleasure. (Especially when compared with studying conflict of laws and federal jurisdiction.)

“It is difficult to think of a serious work of scholarship that is as irresistibly and ceaselessly funny as Laura Little’s study of the intersection of law, lawyers, and humor.  Lawyers may often seem grey, but it is impossible to read this astute book involving topics as diverse as satire, parody, and defamation without laughing out loud on a continuing basis.”
~Floyd Abrams, First Amendment lawyer and author, “The Soul of the First Amendment“

TLS: How did you find your way into humor as an academic field?

Professor Little: I have always been fascinated with what makes things funny. (I even wrote a term paper in college on the syntax and semantics of malaprops). Part of my fascination is indeed scholarly, but part is just simply human curiosity. For example: why does my class not even chuckle at my jokes sometimes, yet other times roar with laughter when I’m not even trying to be comedic?

Drawing on this curiosity, I started my legal academic study with trademark parody and sexual harassment cases. These contexts are chock-full of raw material for studying the attitudes of courts towards comedy. In the course of researching, I was delighted to discover an international interdisciplinary society of scholars dedicated to the study of humor. I joined that august group and have benefitted from their wisdom. I was also pleased to learn about the treasure trove of written analytical work on how humor is created and what effect it has on individuals and society.

(Professor Little uses) the lure of humor to have us wrestle with important ideas that the meeting of humor and the law highlight: free speech principles, democratic theory, and, yes, legal doctrine.
~ Bob Mankoff, former cartoon editor, the New Yorker magazine

TLS: Ok, so tell us about your favorite and least favorite types of humor…

Professor Little: Hmm. That’s a hard one. First off, I don’t think that academic scholarship reveals the “best” or “worst” types of humor. Humor is highly idiosyncratic—one person’s joke is another person’s groan. I personally prefer situational humor above all others: that is, comedy that arises spontaneously from human interactions in situations that are not necessarily intended to produce humor. That said, scripted parody can be quite hysterical, too. And it turns out that parody is the favorite child of law—which routinely provides constitutional protection for parodies of all kinds. My least favorite humor type is puns, which I generally find pedantic and lame. As a general matter, linguistic humor can reflect false intellectualism. But, as I suggested, good and bad humor is totally a matter of taste. That provides a mighty challenge for law, no?

Guilty Pleasures is available at Oxford University Press and Amazon.