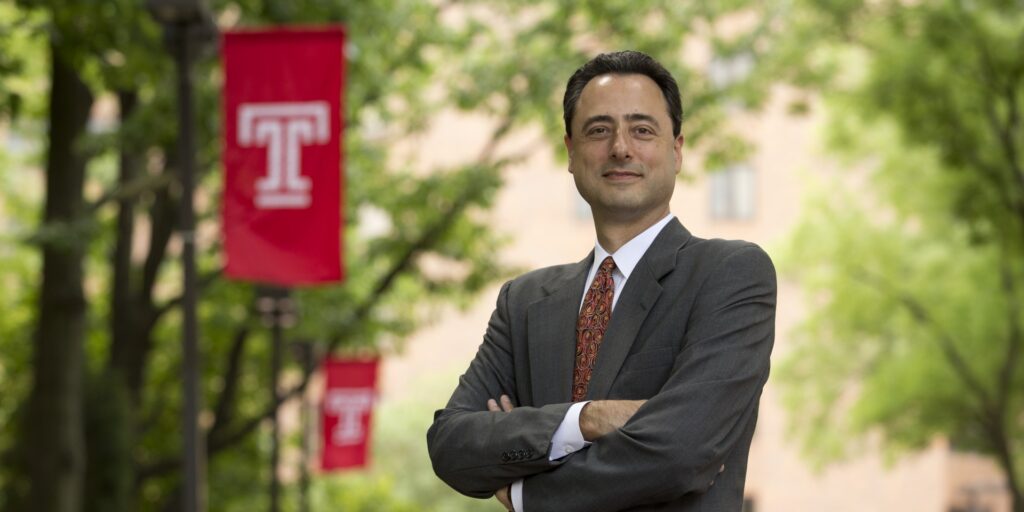 Temple University President Richard M. Englert has announced the appointment of Gregory N. Mandel as dean of the Beasley School of Law, effective May 1, concluding a national search.

A respected member of the Temple Law faculty and senior administration team, Mandel has served as the school’s interim dean since July 2016. He succeeds JoAnne A. Epps, who was appointed executive vice president and provost at Temple University last year after serving as dean of Temple Law since 2008.

“This is the Beasley School of Law’s time,” Englert said. “With Greg at the helm, the law school is poised to build on the momentum established by decades of faculty excellence and the visionary guidance of its former dean, Provost JoAnne Epps.”

He added: “Greg’s presence will strengthen Temple Law’s academic reputation and build its capacity to prepare our students to enter the legal profession and serve their communities.”

Mandel is a leading national expert in the areas of intellectual property law, innovation and the interface between technology and law. His articles have been selected as among the best intellectual property and patent law articles of the year three times—including one that was published last year and another that was recognized as one of the most cited patent law articles of the past decade. Mandel’s experimental studies have been cited by the United States Court of Appeals for the Federal Circuit and in briefs filed before the U.S. Supreme Court. He has presented over 150 times in more than 15 countries, including for the United Nations, the United States Patent and Trademark Office, the American Bar Association and the National Academy of Sciences.

Prior to his appointment as interim dean, he served as Temple Law’s associate dean for research for seven years.

“Greg is a natural leader who is totally committed to excellence in teaching, research and service,” Epps said. “Those qualities helped him guide Temple Law through a period of transition. Now the Temple community is going to get a chance to see another side of Greg: his spirit of innovation. I can’t wait to see where he’ll take the school next.”

Mandel came to Temple in 2007 after serving as a professor and associate dean for research and scholarship at Albany Law School. He has held visiting professorships at Paris Nanterre University, through a Fulbright Senior Specialist grant; the University of Canterbury School of Law in New Zealand; and the University of Cádiz Faculty of Law in Spain.

Mandel received his law degree from Stanford Law School and his undergraduate degree in physics and astronomy from Wesleyan University. He worked on NASA’s Hubble Space Telescope prior to attending law school.

“I look forward to working with President Englert and Provost Epps, and our exceptional faculty and staff, to further strengthen this remarkable law school,” Mandel said. “Our mission to provide a superior, affordable and accessible legal education to a diverse student body sets us apart. I am honored to be a part of advancing both Temple Law’s commitment to being at the forefront of how law schools can contribute to society through scholarship, advocacy, and community involvement, and the role that legal education can play in shaping the next generation of lawyers.”

Temple University Beasley School of Law has surged in national rankings, jumping 20 spots since 2010 to No. 53 nationally in U.S. News & World Report’s Best Graduate Schools. The school has expanded its experiential offerings and significantly enhanced its business and transactional law curriculum while retaining its status as a national leader in trial advocacy.

Since 2013, Temple Law has been home to the Stephen and Sandra Sheller Center for Social Justice, a hub for social justice inquiry and advocacy, as well as the Temple Law Center for Compliance and Ethics, which prepares professionals and students for success in the fast-growing corporate compliance industry.

Last year, Temple announced that Trustee Leonard Barrack, FOX ’65, LAW ’68, and his wife, Lynne, EDU ’68, donated $5 million to the President’s Strategic Fund. The gift will enable the university to create the Barrack Scholars in Law, a five-year scholarship initiative under development at Temple Law School.