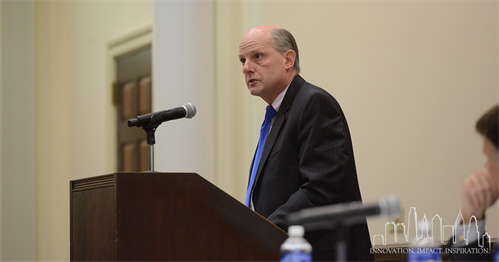 Leo E. Strine Jr., Chief Justice of the Delaware Supreme Court, delivered the inaugural Harold E. Kohn Lecture last night to a standing room only crowd in Temple Law School’s Duane Morris LLP Moot Court Room.  His remarks, titled “Regular (Judicial) Order As Equity: The Enduring Value Of The Distinct Judicial Role,” made the case for “a judicial mindset that favors regular order over the episodic judicial grant of exemption from required procedural expectation and the need to secure contractual rights at the bargaining table.”  The text of the speech will be published in an upcoming issue of the Temple Law Review.

Chief Justice Strine is among the nation’s preeminent jurists, widely recognized as a leading authority on matters of corporate law as well as larger questions of governance in complex environments. Before becoming the Chief Justice, Strine served on the Delaware Court of Chancery as Chancellor and Vice Chancellor.  He holds adjunct teaching positions at the University of Pennsylvania, Vanderbilt, and UCLA Schools of Law, where he teaches various classes in corporate law.  He is also Senior Fellow of the Harvard Program on Corporate Governance, as well as the Austin Wakeman Scott Lecturer in Law at Harvard Law School.  Chief Justice Strine has served as the special judicial consultant to the ABA’s Committee on Corporate Laws since 2006.

The Harold E. Kohn Lectureship is named in honor of Harold E. Kohn, the Philadelphia lawyer who was the architect of the modern-day class action. Harold Kohn “brought many cases to protect ordinary people and their rights against government and big corporations,” remembers former Temple Dean Robert J. Reinstein. “He was a remarkable man.” Kohn became nationally famous for his innovative civil antitrust practice in the 1960s, famously (and successfully) suing firms ranging from electronics manufacturers to the timber industry. Kohn also helped to draft some of the federal court rules for class action cases and for the consolidation of cases. Known as the “grandfather of class actions,” Kohn also took on cases involving the First Amendment, privacy, zoning and commercial transactions. Known as a titan of the Philadelphia Bar, Kohn was a member of Temple’s Board of Trustees and a generous donor to the law school.

Len Barrack, Esq., LAW ’68, one of Harold Kohn’s many protégés and a long-time colleague, credits Kohn with teaching him how to be a great lawyer.  He cites Kohn as one of the great lawyers of the 20th century. The Kohn Chair was jointly endowed by the Barrack Foundation and the Kohn Foundation, co-directed by Kohn’s widow, Edith Kohn, and his son, Joseph C. Kohn.