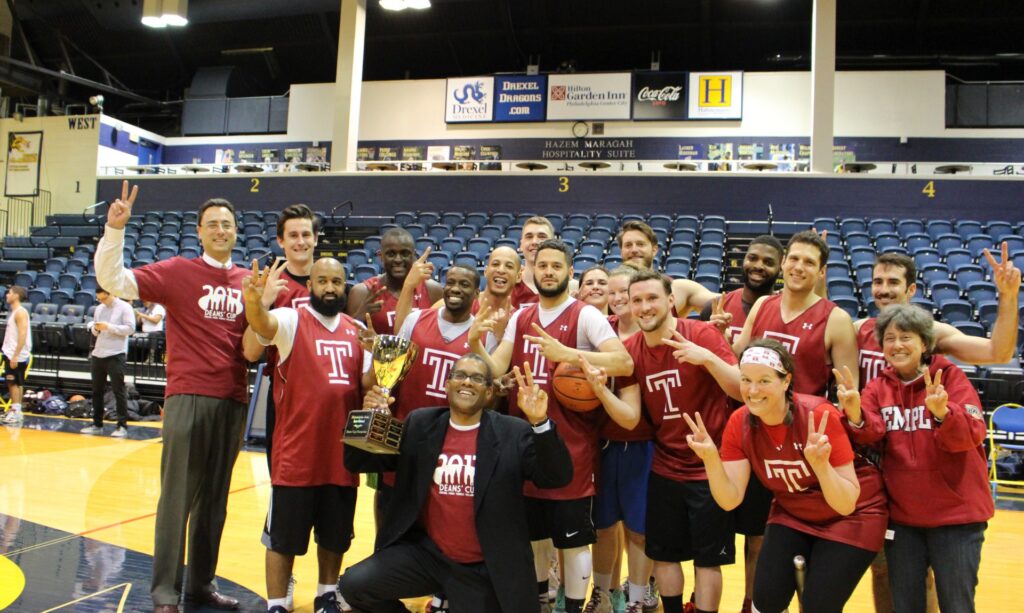 The Deans’ Cup made a quick trip to Drexel University’s Daskalakis Athletic Center on April 6th as teams from four area law schools vied for the right to take it home in the 2017 Deans’ Cup Basketball Tournament, but in the end there was no doubt where it belonged as the Temple Law Owls claimed the championship for the second year in a row.

The 2017 tourney was the fifth annual Deans’ Cup competition, which began as a matchup between Temple’s Beasley School of Law and Villanova’s Widger School of Law, but last year expanded to include teams from Drexel’s Thomas R. Kline School of Law and the University of Pennsylvania Law School. Proceeds from the evening were split among the schools’ respective public interest organizations: Temple’s SPIN, Penn’s Equal Justice Foundation, Villanova’s Walter Lucas Public Interest Fellowship Program, and Drexel’s Public Interest Experience.

Play began after a soaring rendition of the national anthem by Drexel 3L Shelly Paznokas. The first round pitted Temple against Villanova and Drexel against Penn on adjacent courts, playing before stands packed with Temple fans. The Law Owls jumped to an early lead despite strong play from a tough Villanova squad, ending the first half with a 32-13 lead that was much closer than the score would suggest. Villanova fought back in the second half but was unable to overcome that 19 point deficit, and Temple claimed a 49-30 victory, sealed with a buzzer-beater from mid-court by 1L Claude Ruboneka.

Temple’s squad enjoyed an extended rest as Drexel and Penn battled to a 30-30 tie at the end of regulation, after which Penn pulled away in a 2 minute overtime to take the match 36-30. The championship round, pitting Temple against Penn, began after a brief intermission featuring the four Deans in a free throw contest won by Villanova’s Dean Mark C. Alexander. “Dean Mandel (almost) did us proud in the free throw contest (blame his shoes),” remarked Interim Associate Dean for Students Eleanor Myers. “He is a former Deans’ Cup team member and a really good sport!”

The Law Owls again set the tempo from the start, controlling the court and the ball to take a 28-11 lead at the half. They did not look back after that, cruising to a 40-25 victory and raising the Cup at half court before a jubilant Temple crowd. Dean Greg Mandel and Dean Eleanor Myers joined the celebration on the court, and Myers offered strong praise for all who had worked to make the night a success. “Temple Law won both on the court and in the stands,” she said. We had a great team of students and faculty, wonderful coaches, and bleachers full of Temple Law’s enthusiastic supporters.” Myers also noted the team of students and staff whose work off the court made the evening such a success. “SPIN leaders Lilah Thompson and Liz Schultz and the entire SPIN leadership deserve special recognition for organizing and sparking wide spread enthusiasm,” she said, before giving a “special shout out to Katie Perry from the Office of Student Affairs for running around in the driving rain to collect uniforms and the trophy and a thousand other things.”