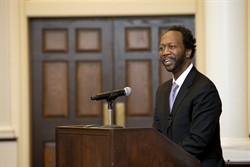 March 25, 2013 – William M. Carter, Dean of the University of
Pittsburgh School of Law, presented the 2013 Clifford Scott Green
Lecture to a packed house in the Duane Morris LLP Moot Court Room.
Dean Carter’s remarks were titled “The Promises of Freedom: The
Contemporary Relevance of the Thirteenth Amendment.”

Prior to his appointment at Pitt,  Dean Carter served on
Temple’s faculty for five years, teaching popular courses in
constitutional law, civil procedure, political and civil rights,
and litigation.

A Cleveland native, Dean Carter studied law at Case Western
Reserve University School of Law. Following graduation in 1998, he
joined Squire, Sanders & Dempsey and Ropes & Gray in
Washington, D.C., where he worked as a litigator. He returned to
Case Western as a member of the law faculty in 2001, and was named
professor of the year three years in a row.

Today, Dean Carter is recognized as a legal scholar with a deep
interest in social justice and community issues. He is a past board
member of the Ohio Racial Fairness Report Project, has done pro
bono work for Ugandan nongovernmental organizations and has written
and spoken on issues of civil rights, racial profiling and
affirmative action.