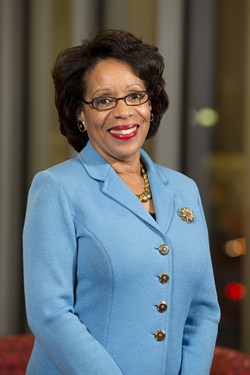 National Jurist Magazine
has named Dean JoAnne Epps among the 25 most influential people in
legal education in 2013, citing her “vision for the law school that
includes not just curricular innovation and increased experiential
opportunity, but an emphasis on institutional agility and
responsiveness.”  The magazine noted Epps’ role in moving
legal education away from a one-size-fits-all model.

Although it is her first time on this list, it is not the first
time Epps’ impeccable reputation and considerable influence have
garnered national and regional attention. She is a three time
honoree as one of the nation’s top 100 black lawyers, compiled
annually by Lawyers of Color Magazine, and in 2012 was named a
“Distinguished Daughter of Pennsylvania.” She is the 2009 recipient
of the Sandra Day O’Connor Award, conferred annually by the
Philadelphia Bar Association “on a woman attorney who has
demonstrated superior legal talent, achieved significant legal
accomplishments and has furthered the advancement of women in both
the profession and the community,” and was also selected by the PBA
to deliver the Higginbotham Lecture for that year.