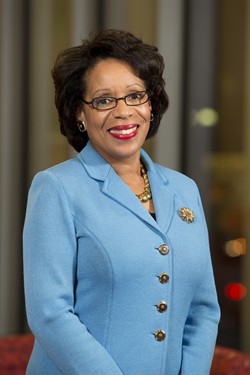 Philadelphia Mayor Michael Nutter has appointed Dean JoAnne Epps to lead an independent Oversight Board formed in response to a recent Justice Department report about Philadelphia police shootings. The board, which will report to the Mayor, has been charged with ensuring that that the report’s recommendations for reform are carried out.

The report, released March 23, 2015, focused on the use of force and especially lethal force by the Philadelphia Police Department, and found that deficiencies in training and a lack of transparency led to “significant strife” between the police and the communities they serve.

“I am honored that the Mayor has called on me to serve the City of Philadelphia in this capacity,” remarked Dean Epps.

Dean Epps has been called on to work with both the City and the police before. In 2011, she was appointed by the United States District Court to serve as monitor of the City of Philadelphia’s compliance with the settlement of Bailey v. City of Philadelphia, litigation challenging the City’s stop-and-frisk procedures. In 2001, she was appointed by Philadelphia Mayor John Street to serve as Chair of the Mayor’s Task Force on Police Discipline. The Dean expressed hope that these experiences, “will enable me to contribute to everyone’s goal of effective and respected policing.”

For a profile of Dean Epps by the Philadelphia Inquirer, please click here.