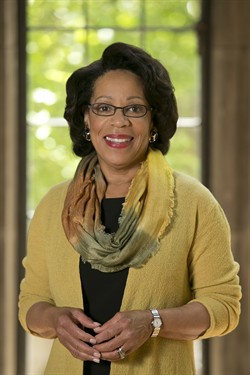 “Stay vigilant, and when appropriate, get mad.” Dean JoAnne Epps encouraged approximately 900 audience members at the 2015 Annual Meeting for the National Association for Women Lawyers (NAWL), held this week in New York, to know what they were fighting for, and what they were up against, in the ongoing struggle for diversity in the legal profession.

Epps delivered her remarks while accepting the 2015 M. Ashley Dickerson Award, given each year to a lawyer who has promoted and advanced diversity in the legal profession. The award is named for trailblazer Mahala Ashley Dickerson, NAWL’s first African-American President, who served from 1984-1985. While noting that she had never met Dickerson, Epps said that actually made the recognition even more meaningful. “Her life’s work touched me, across distance and time. If anything I do can reach some person and encourage them to join the fight, what I do will have mattered,” she remarked. “And the idea that it may be someone I don’t know is all the more satisfying because it reinforces the fact that we don’t always know whose lives we’ve touched.”

Epps focused on both the challenges confronting efforts toward greater diversity and the reasons it is worth fighting for, using the example of Facebook’s recent change to more gender-inclusive iconography to talk about the “pervasive, pernicious, subtle and way-too-often overlooked” effects of implicit bias. She noted, too, the impact of misunderstandings about why diversity is important. “People who don’t understand diversity complain that it is difficult and uncomfortable, and have recently expressed worry that the phrase, or heaven forbid the concept, might be suffering overuse fatigue. But those people don’t understand that diversity forms the palette of our world …. It is diversity that gives our world contours, and passion, and magic.”

Long a champion for women and minorities within the profession, Dean Epps has also been honored with the 2014 Justice Sonia Sotomayor Diversity Award by the Philadelphia Bar Association and is a three-time honoree by Lawyers of Color Magazine as one of the 100 most influential black lawyers in the country. Epps is a member of the Consortium for Women’s Leadership, based at the Center for Women in the Law at the University of Texas School of Law, a member of the Board of the National Association of Women Lawyers Foundation, and the current president of the Pennsylvania Women’s Forum. In 2009, the Philadelphia Bar Association recognized her longstanding efforts on behalf of women by honoring Dean Epps with the Sandra Day O’Connor Award, conferred annually on “a woman attorney who has demonstrated superior legal talent, achieved significant legal accomplishments and has furthered the advancement of women in both the profession and the community.”