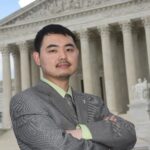 Temple Law student Christopher Lin LAW ’19 has been chosen for a prestigious Peggy Browning Fellowship. The Peggy Browning Fund provides law students dedicated to the advancement of workers’ rights with the opportunity to work with a labor-related organization. Lin was distinguished from a pool of 400 applicants for this highly competitive, national fellowship. During his ten weeks as a Browning Fellow, Lin will provide various forms of legal aid to the Sheet Metals Workers Local Union No.19. The SMWLU fiercely protects the rights of sheet metal workers in Pennsylvania, Delaware, and New Jersey.

Lin is uniquely qualified for this position. As President of the Temple Law Democrats and Vice President of the  American Constitution Society, Lin has demonstrated exceptional leadership skills among his peers. Additionally, he is a Rubin-Presser Social Justice Fellow, a Weisman Fellow, a Beasley Scholar, and a Law and Public Policy Scholar.

Much of Lin’s scholarship has focused on the impact of civil liberties, technology, and homeland security on local communities. In fact, Lin recently co-published an article in The Inquirer with his Sheller Center for Social Justice companions, Liz Torres and Tony Sierzega. The op-ed detailed potential political solutions to the growing lead poisoning epidemic in Philadelphia’s underserved communities.

Temple Law School’s Director of Public Interest Programs, Lisa Hurlbutt, was impressed but not surprised when Lin was selected for the honor. “As a Rubin-Presser Social Justice Fellow, Chris came to the law school with a passion for and an impressive record of public service,” she remarked. “From his leadership roles in student organizations to his participation in the Justice Lab clinical at the Sheller Center for Social Justice to his political activism outside of the law school, Chris has made a real impact on campus and beyond in his first two years at Temple.”

Given his substantial experience with both federal and local government, Lin’s impact extends to the community at large. In fact, he will be running for Democratic Ward Committee Person. If he is successful, Lin will serve voters of Ward 8 Division 5 as a spokesperson to their elected officials.