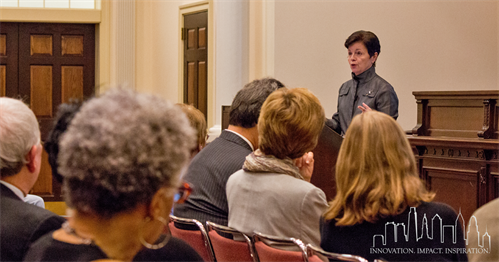 Chilton Davis Varner, senior partner at King & Spalding and one of the top products liability litigators in the country, delivered the 2014 Kolsby Lecture in Trial Advocacy on October 14, 2014. Her remarks, titled Reflections on Atticus Finch and Scout:  Lessons Learned in the Law, served as a powerful reminder for many in the room of why they chose a life in the law and why advocacy is seen by many as the heart of what lawyers do.

Varner framed her remarks around passages in Harper Lee’s novel, To Kill A Mockingbird, talking at length about the courage of the lawyers and judges who helped to dismantle racial segregation in the South. Like Atticus Finch, she offered, these men and women often took on the “unpleasant jobs” that were necessary to maintain the rule of law. They “solved problems, even the hard ones.” These lawyers understood that advocacy itself has power above and beyond the outcome of a case.

With respect to how advocates do their work, Varner offered two thoughts. First, she said, “less can be more” whether persuading a jury or helping a judge reach the right result. Varner recommended simple, direct words and sentences, clarity, and thoughtfulness.  Second, she cautioned, was to be the keepers of our own professionalism. “Lawyers and judges should hold themselves to a higher standard,” Varner explained.

Varner concluded with the thought that the “best lawyers and judges are those who have a life enriched not only by the law, but by enjoyments.” Returning to Atticus Finch as her role model, she noted that he “was not just a lawyer. He was a single father, a champion checkers player, the best shot in the county, and enjoyed playing the mouth harp, a primitive version of the harmonica.” Varner also noted that as the first woman litigator at her firm, she was exceptionally driven to succeed at her practice and in that pursuit lost sight of her other interests. “When I looked around, though, I found lawyers with diverse interests …. Being a good, energized, and alert lawyer requires an outside life. The highest calling for each of us is to be good at what we do and to live a complete life.”