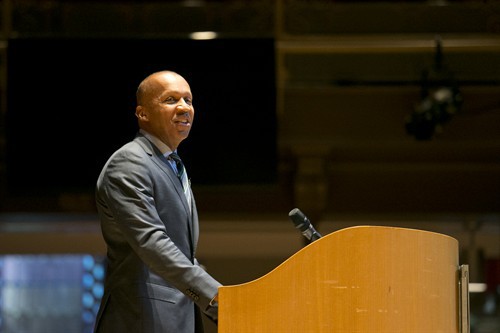 Stevenson was introduced by Temple’s Director of Advocacy Programs, Professor Jules Epstein, who described him as someone who “changes conversations.” “Some lawyers litigate,” Epstein began. “Others litigate and change the conversation. Since entering the profession in the 1980s, conversations … have been changed by Bryan Stevenson’s work and words.” Epstein cited several national conversations, including capital punishment, juvenile justice, solitary confinement, mass incarceration, mental illness, and actual innocence, that have all been changed by Stevenson’s work. He then invited the audience to listen to what his colleagues across the nation had to say about Stevenson: Barry Scheck (“an inspirational force filtered through a first class intellect and deep well of compassion for all the broken people); Stephen Bright (“a courageous and visionary leader who is bringing Alabama and the South to face its history of slavery, lynching, and other racial oppression that continues to this day”); Justice Bridget McCormack from the Michigan Supreme Court, who recalled listening to him speak as a “formative moment;” and Scott Sundby (“the most inspirational person I have ever heard”).

Epstein concluded by noting Stevenson’s Temple Law connection – an internship at the Juvenile Law Center that became the foundation for a close and fruitful collaboration still today. Stevenson, who spent parts of his childhood with family in the northwest section of Philadelphia, commended Temple Law as a community worthy of “great respect.”

Stevenson opened his remarks with an observation that, with 70 million people living with a criminal arrest history, America has the highest rate of incarceration in the world. After noting the devastation wrought by mass incarceration on American communities, he suggested that “we live in a time when we need more people who are willing and able to change the world.” Stevenson then outlined the four steps that he believes each person can undertake to create justice and change the world.

Get proximate. “We cannot create justice and change the world,” Stevenson said, “unless we choose to get proximate to the problem. You can’t do justice long-distance.” Recounting an experience visiting a prisoner on death row as a law student, Stevenson explained that, “proximity changes us – we become different people when we are exposed to other people’s suffering…. It changed me. It will change you.” He encouraged listeners, especially law students, to “get closer to the places with despair if you want to change the world.”

Change the narrative. The second action necessary to create justice, explained Stevenson, is to change the narrative behind the problem you are trying to solve. “With mass incarceration,” he said, “the real problem is the narrative – the politics of fear and anger … we pride ourselves on being ‘tough on crime.’ Fear and anger are the driving force behind policies that lead to abuse, injustice, and oppression.”

Noting that Pennsylvania has the largest population of children on death row in the world, Stevenson described how criminologists “rebranded black and brown boys as superpredators. Who is responsible for this? We are. We have allowed our policy-makers to do things to children that are unjust.”

Perhaps the most devastating narrative, in Stevenson’s analysis, is the one Americans have accepted about the history of racial injustice in America. “We have been infected by a narrative of racial difference,” exclaimed Stevenson. “We must talk about slavery. The great evil of slavery is the ideology of white supremacy that we made up to justify the institution of slavery… other societies have slaves, but we are a slave society, and we must deal with it.” Casting the African-Americans who fled the South in the era of racial terror known as Jim Crow as refugees, Stevenson drew a connection between the narrative of racial difference and the poverty and despair that remain in black communities today. He then argued that the solution was a process of truth and reconciliation similar to those in South Africa, Rwanda, and Germany, and warned that, “the narrative has to change. We have to help people – white, black, brown – recover from this dangerous narrative.”

Be hopeful. “The greatest threat to justice,” remarked Stevenson, “is hopelessness. When we lose hope, we become part of the problem. We must protect hope!” Directing his remarks at law students in particular, Stevenson encouraged them to “hold on to hope… you come to school with so many aspirations, and then life gets complicated… if we can stay hopeful about what we can do, hope is what gets us to stand up when others sit down.”

When we do these four things, said Stevenson, we become “broken.” “I do what I do,” he remarked, “because I’m broken. When you get proximate, you get broken. The broken, though, understand mercy and grace. There is power in that brokenness.” Speaking again about his roots in North Philadelphia, Stevenson noted that when he thought about those neighborhoods, he remembered the despair. “The opposite of poverty is not wealth,” he said. “It is justice. We cannot deconstruct poverty until we seek justice.”

Asked how he sustains the fight for years at a time, Stevenson concluded: “I cannot stay silent. Once you get proximate you can’t be indifferent, you can’t stop. On the other side of this work is a more just society, and I want that more just society.”