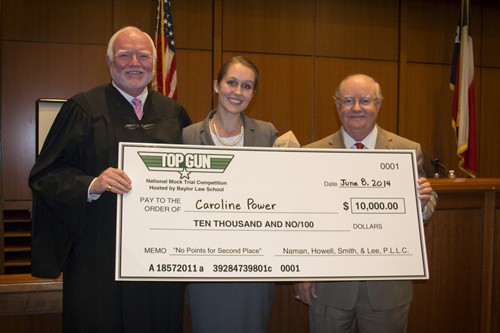 It’s been a good summer for Caroline Power. Just weeks after earning her J.D. as part of the Temple Law Class of 2014, Power on Sunday took home the top prize at Baylor Law School’s 2014 Top Gun National Mock Trial Competition. Power, who beat out participants from 16 other law schools across the nation, received a prize of $10,000 along with the title of Top Gun.

Power said the unique nature of the competition – participants are not given the case file until 24 hours before the first round of trials begin – made the Top Gun tournament particularly difficult. “This is the toughest competition I’ve been in,” she said. “Just the dynamics of it, the pressure of it.”

Contestants this year argued a case regarding copyright law. A publisher was accused of encouraging a novice writer to take elements from an established writer’s series of children’s books. To win, Power had to review depositions, records, and photographs before the case, work with new pieces of evidence as the tournament progressed, and argue in front of a jury of distinguished trial lawyers and judges. In the final round of competition, Power argued before presiding Judge Leonard E. Davis, Chief Judge of the United States District Court for the Eastern District of Texas. Davis had high praise for Power, describing her as talented, fluid, articulate, and persuasive.

Power, assisted by her second chair and technology assistant Victoria Miranda and coached by Sara Jacobson,  makes Temple Law the first law school with multiple Top Gun Competition winners. Jeffrey Goodman won the award in 2010, the inaugural year of the competition. The victory also caps an impressive year for Power, who in March was part of the Temple Law National Trial Team that advanced to the elite eight of the National Trial Competition in Austin, Texas.