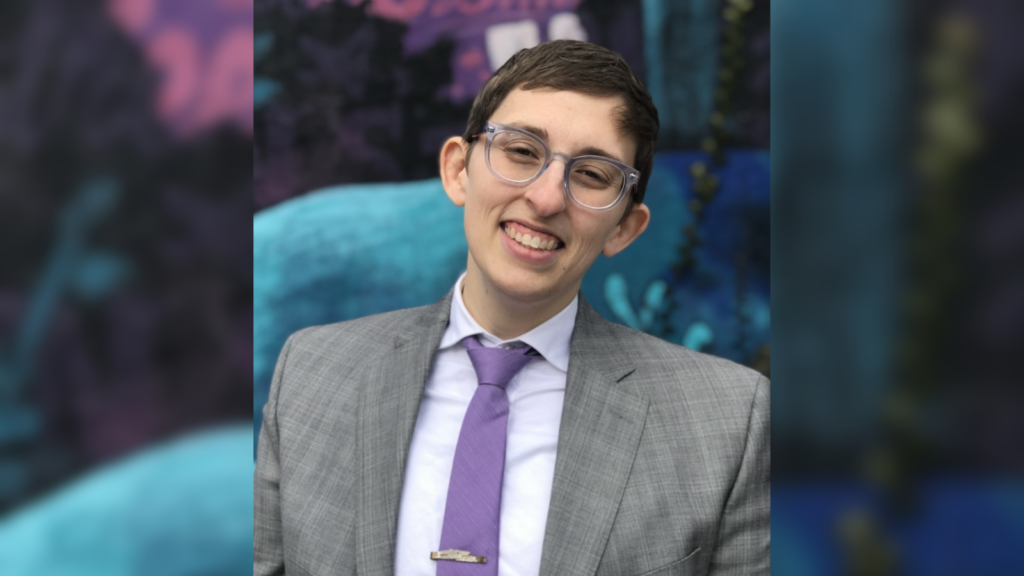 Temple Law graduate Betton “BK” Katzmann LAW ’22 is the 2022 recipient of the David G. Rosenblum Law Student Leader Award from the LGBT Rights committee of the Philadelphia Bar Association. The award recognizes someone who, as a law student, demonstrates a commitment to the LGBTQ+ community and exhibits leadership skills through inspiring collaboration and/or staking out brave positions. Katzmann was nominated by Equality Ballard, Ballard Spahr’s LGBTQIA+ business resource group, with a supporting endorsement by the law school. In addition to interning at Ballard following their 2L year, Katzmann will return to the firm as an associate this fall.

“BK has demonstrated an unwavering commitment to advancing LGBTQ+ and TGNC (Transgender and Gender-Nonconforming) rights, has worked tirelessly to strengthen the LGBTQ+ legal community, has impacted LGBTQ+ individuals through their advocacy work, and is a compassionate and inspiring leader,” wrote Elizabeth Weissert and Nikki Hatza LAW ’20 on behalf of Equality Ballard. Assistant Dean for Students Jennifer Bretschneider, writing on behalf of the law school faculty and administration, concurred. “BK Katzmann has demonstrated exemplary commitment to service both within the LGBTQ+ and TGNC communities and in the broader field of public interest, which we believe is itself staking out a brave position that collective well-being is the strongest foundation for the well-being of specific groups within the larger community,” she wrote. “Their leadership and vision for a just world grounded in the experiences of real people have inspired the faculty and administration at Temple Law School, and we are deeply proud to support their nomination for the David Rosenblum Award.”

Early in their law school career, Katzmann got involved with Temple Law’s Name Change Project, which offers pro bono representation to low-income transgender and non-binary people seeking name changes in Philadelphia and select surrounding counties. In their 3L year, Katzmann became one of the Project’s student coordinators, taking on responsibility for finding new client referral sources. As a result of their work, the Project was able to partner with Einstein Hospital’s Pride Program, expanding its client list to several dozen with a wait list of many more. Professor Kathy Mandelbaum is the faculty advisor for the Project. “BK has an amazing way of connecting with our clients and with the LGBTQ+ community at the law school,” wrote Mandelbaum in support of Katzmann’s nomination. “BK is a source of comfort, perspective, and guidance for many of our students. They are open about their gender and talk about their experiences with others. I cannot think of a student with whom I have worked at Temple who better exemplifies the traits recognized by the Award. I will miss BK as a student but very much look forward to where their professional, pro bono, and personal paths take them.”

“It was an honor to steward the Name Change Project forward as Temple Law and the court system returned to more normal after COVID quarantine,” said Katzmann. “There is a deep need for trans-affirming legal name changes in Philadelphia, and I have always wanted to do everything I could to support my community. Whenever identification is needed—for school, jobs, or public benefits—it is essential to have our legal identity match our lived experience. I am honored to further the legacy of David M. Rosenblum, whose tireless work for LGBTQ+ rights provided space for so many, including myself, to live and work authentically in the legal profession.”