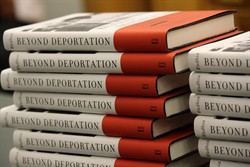 Temple Law students and faculty with an interest in immigration law were treated to a robust panel discussion about the role of prosecutorial discretion in immigration cases, hosted by the Institute for International Law and Public Policy and moderated by co-director Professor Jaya Ramji-Nogales.

The panel brought one of the nation’s leading authorities, Shoba Sivaprasad Wadhia, who serves as the Director of the Center for Immigrants’ Rights Clinic at Penn State Law School, to discuss her new book, Beyond Deportation: The Role of Prosecutorial Discretion in Immigration Law. Professor Jill Family, the Director of the Law and Government Institute at Widener University’s Commonwealth Law School in Harrisburg, offered remarks about the implications of Professor Wadhia’s work for the larger field of administrative law.

For Professor Wadhia, the real story in Beyond Deportation is a human one. “The human impact cannot be overstated,” she remarked. “Each person threatened with deportation has a story.” Prosecutorial discretion – the decision by a government employee or immigration agency about whether to enforce the law against an individual or group of individuals – creates space for the government to inject compassion into the process and allows an agency to direct resources in support of particular priorities. While tenuous, it is pivotal to individual immigrants as protection from deportation.

Beyond Deportation tracks the history of deferred action, a common exercise of prosecutorial discretion, and how it has been applied to different populations of immigrants over the years. Professor Wadhia said her work was made more difficult by the lack of transparency around how deferred action decisions are made. Much of the data in the book were gathered through requests under the Freedom of Information Act (FOIA), which, as she noted, is not a practical course of action for immigrants or their advocates when trying to determine the process and criteria by which such decisions are made.

“Transparency promotes consistency, efficiency, and public accountability,” noted Wadhia. “It improves the possibility that justice will be served for people whose roots and presence are in the United States.” While Deferred Action for Childhood Arrivals (DACA), a relatively new deferred action program targeting those who arrived in the U.S. as children, has transparent processes and criteria, the general deferred action program does not. Wadhia offered several recommendations for increased transparency in the general program: “The program should be formalized,” she said. “It should be centralized at United States Citizenship and Immigration Services. There should be a form, and they should charge a user fee for processing it. They should provide notification of receipt and make clear that information provided on the form will not be used against the petitioner. And there should be public statistics, facts, sample forms, and criteria.”

Professor Family agreed, noting that Beyond Deportation raises larger questions for administrative law as well. Seconding Professor Wadhia’s foregrounding of themes like transparency, Family also observed that “immigration law regulates human beings, and so will always need prosecutorial discretion. There must be equity in immigration law …. The pressure is on the Executive to inject humanity into the process.”

While noting that Professor Wadhia’s foresight in researching and writing Beyond Deportation bordered on prescience, Family concluded that the issues illuminated by the book were here to stay. “What would make this book irrelevant?” she asked. In the absence of comprehensive immigration reform and given that the discretion to inject equity has largely been stripped from immigration judges, she said that “short of major policy shifts in D.C., it’s not happening soon.”

The panel also discussed a recent District Court decision in Texas that temporarily enjoined another deferred action program called Deferred Action for Parents of Americans and Lawful Permanent Residents (DAPA) as well as 2014 amendments to DACA. The court found fault under the Administrative Procedures Act with the Obama administration’s decision to use guidance documents in launching the program, rather than submitting it to a more formal notice and comment process. Professor Family observed that “this brings immigration law into the bigger debate about the proper use of guidance documents.” In her opinion, the administration acted properly, but perhaps not wisely: “There is a difference between whether an agency must or should use notice and comment rule-making. Did the administration have to use it? No. Should they have? Yes.”

Professor Family described immigration law as “caught in a larger debate about the proper use of guidance documents and regulation generally … where is policy made? What about the legitimacy of the regulatory state?” At the same time, she noted, “immigration law is about regulating human beings. Perhaps it should be exceptional in administrative law…. Should traditional administrative law doctrines apply?”

No matter how those questions are resolved, both panelists agreed that while prosecutorial discretion in the form of deferred action was a necessary, even life-saving, avenue for injecting equity into the removal process, it was not and could never be enough. “There are real limits to prosecutorial discretion,” remarked Professor Wadhia. “It promises nothing. It’s immigration purgatory, legal limbo. It offers no independent path to permanency. We need a real solution – with teeth – legislation that offers real, meaningful status to people who want to make contributions to society.”