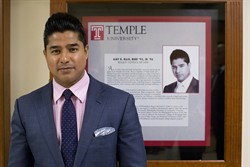 Ajay Raju ’96 has been inducted into the Temple University Gallery of Success, which honors University alumni for their outstanding professional achievements.

Raju, who received both his bachelor’s degree and juris doctor from Temple, is a member of Reed Smith LLP’s Global Executive Committee and the managing partner of the firm’s Philadelphia office. His legal practice is national and international in scope, with a strong emphasis on structured finance and real estate capital markets transactions, and he has a top reputation in a broad spectrum of other transactional areas, including mergers, acquisitions and divestitures, joint ventures, and cross-border strategic alliances.

Recognized as one of the foremost authorities on issues arising from India’s emergence as a global power, Raju is frequently consulted by some of the world’s top corporations for counsel in navigating the Indian market. He was recently named by Lex Witness, a leading Indian journal of legal and corporate affairs, as one of India’s Top 50 power players shaping the country’s modern legal and business landscapes.