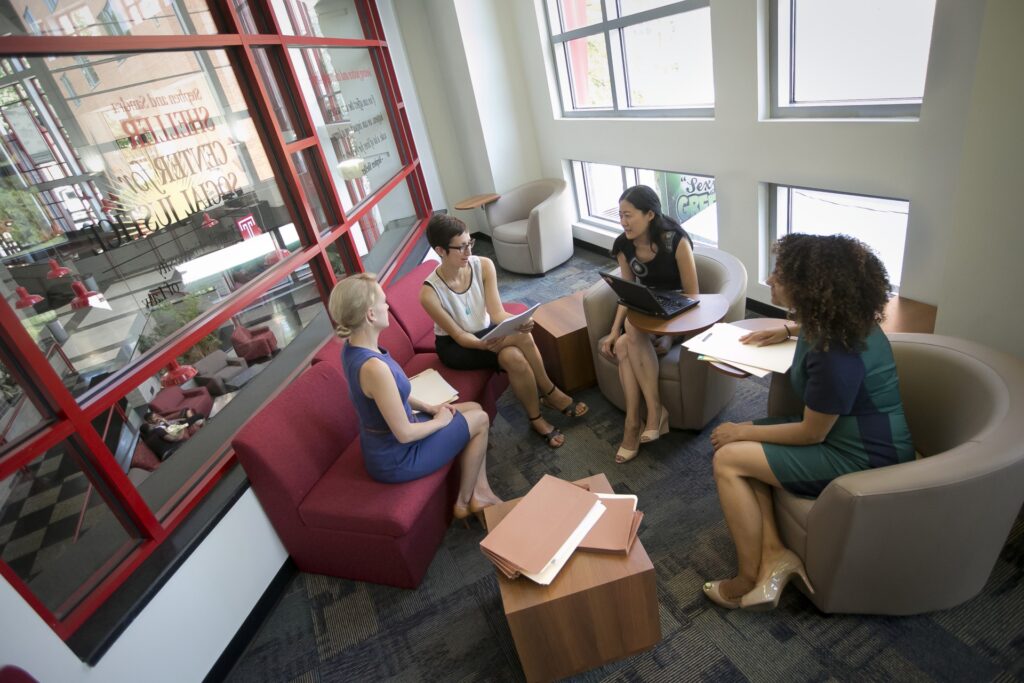 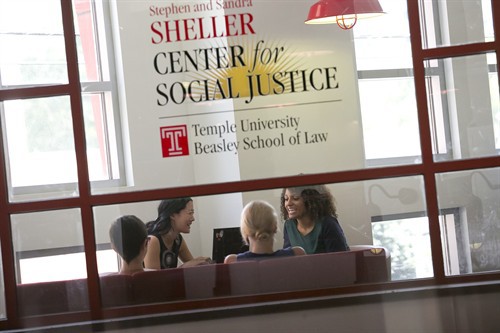 Ed. note: Temple Law School has always been “home” to passionate students who don’t wait for graduation to use their advocacy skills in service to the community. The Social Justice Lawyering Clinic at the Sheller Center is one way these students have found to make an impact now. We checked in with Professor Jen Lee, who runs the clinic, and with Michaela Dragalin, Danielle Newsome, and Jody Lopez-Jacobs, all members of the Class of 2015, to find out more about the clinic and its work.

What is Social Justice Lawyering?

Temple Law students know that there are many different ways to be a lawyer. While much of traditional lawyering is adversarial and takes place in a courtroom setting, social justice lawyering “deploys multifaceted strategies to accomplish change for underserved communities,” explains Professor Lee. “It might involve investigating facts that help reveal an injustice, educating an impacted community about its rights, or amassing evidence to help argue for a change in policy. Relationships with clients may be more collaborative. As lawyers, for example, we have worked as team members on projects alongside community members, organizers, and other lawyers.”

A Focus on Impact

Such collaborations reflect one of the defining characteristics of social justice lawyering: a focus on helping those affected by an issue become part of the solution. “We seek out projects where we feel our work will have an impact on underserved communities,” says Professor Lee. “We’re particularly interested in projects that help empower individuals and communities to define or create change.”

For example, consider the four policy papers issued by the Social Justice Lawyering Clinic: Barriers to Justice for Non-English Speakers in Pennsylvania Courts;   A Changing Landscape; Driver’s Licenses for All: The Key to Safety and Security in Pennsylvania; and Shortchanged: How Wage Theft Harms Pennsylvania’s Workers and Economy. While each project addresses an issue facing immigrants and immigrant communities, they vary in terms of methodology and goal.

Shortchanged, for example, shines a spotlight on the issue of wage theft in Pennsylvania and, in so doing, has caught the attention of AFL-CIO leader Richard Trumka, who recently called for unions to help by providing support, organizing coalitions, and pushing legislative efforts to raise, for example, the minimum wage in Pennsylvania. Its findings and recommendations are currently being reviewed by the Pennsylvania Department of Labor and Industry, and several community organizations are using the report to support their own efforts to tackle the issue. Clinic students also worked with an association of day laborers in Philadelphia to create a wage theft prevention workshop and know-your-rights materials.

Barriers to Justice, which addresses language access for non-English speakers in Pennsylvania’s lowest courts, was intended to both encourage and support efforts at reform. Danielle Newsome explains: “I worked with two other students to research the lack of translation and interpretation services for non-English speakers who need to use Pennsylvania’s lowest level courts. These courts handle protection from abuse orders, small claims, and even criminal arraignments, so it’s very important that the parties understand what is going on. Our report outlined the extent of the problem in Pennsylvania counties with the highest population of non-English speakers and made recommendations for improving access and complying with federal regulations.” The report has been used by the Administrative Office of Pennsylvania Courts (AOPC) in its ongoing efforts to improve language access and by the Pennsylvania Bar Institute in a CLE course exploring the issue.

A Changing Landscape addresses the issue of immigration detainers, in which local authorities detain individuals at the request of immigration officials after they are otherwise eligible to be released. The goal was to shed light on local practices in the wake of a court ruling that municipalities might face liability for doing so. “We heard stories about how municipal police forces had been detaining individuals without probable cause or a warrant because of their suspected immigration status. The federal government would ask local law enforcement to hold persons they suspected of being undocumented,” explains Jody Lopez-Jacobs. “Then the Third Circuit ruled that local authorities are not required to honor immigration detainers, and that if they did without probable cause, they might face liability. In the wake of this decision, it became unclear what local law enforcement was actually doing, so we reached out to county officials in nearly all of the sixty-seven counties in Pennsylvania and learned that there was no uniform policy or practice with respect to immigration detainers. We did, however, see a trend toward counties deciding to not honor them.”

For Michaela Dragalin, who worked on Driver’s Licenses for All, the goal “was to assist the Pennsylvania legislature while it considered a legislative bill that would change the driver’s license law, as well as to inform the public on the possible benefits that the state should anticipate if the law were to change.” To make the case, Dragalin and her colleagues concentrated on the economy, public safety, and human rights concerns. Then, they introduced an equally powerful tool: the stories of people who have suffered under the current law. Meeting some of these people, Dragalin explains, “helped show what we were working for. It made the issue much more real to me, and I thought if we could portray these stories to the readers of our White Paper in an equally impactful way, we could be much more convincing.”

Insights like Dragalin’s are part of what the clinic is designed to produce, explains Lee. “Individual cases can provide grounding in individual experiences of injustice and help inform why systemic approaches, although more challenging, are sometimes preferable.” As a result, “students learn traditional litigation skills, such as interviewing, counseling, and negotiation, but also have opportunities to engage in other forms of advocacy, such as presenting findings to a state agency, attending a meeting with policy makers, or conducting community education. The hybrid approach helps them to learn about the benefits and drawbacks of different approaches.”

The students, for their part, get it. “I’ve learned that it’s a detriment to your work if you approach a problem the same way every time,” says Dragalin, who signed up for the clinic because she “believed it offered me the ability to become an advocate in more than one way.” Newsome agreed. As a result of taking the Social Justice Lawyering clinic, she says, “I’ve learned to become a better listener and to think more creatively about what legal advocacy can really mean.”