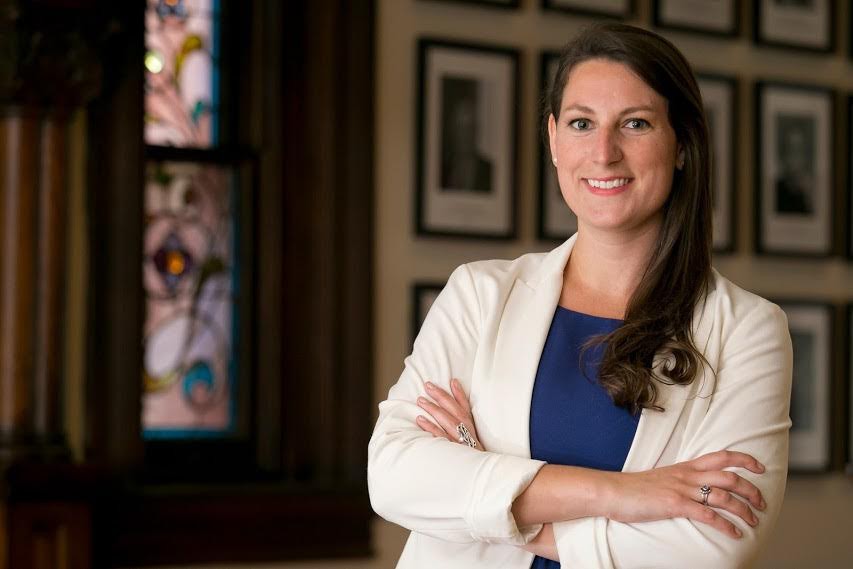 Editor’s note: Temple Law School has always been “home” to passionate students who don’t wait for graduation to use their advocacy skills in service to the community. Second-year law student Lilah Thompson is a Law & Public Policy Scholar and the creator of  Between Borders: A Refugee Simulation, which seeks to raise awareness and shift perception of the refugee experience through role-playing exercises. We checked in with Lilah to learn more about her community advocacy work involving refugees, asylum seekers, and immigrants.

TLS: What drew you to working with refugee and immigrant communities?

My passion for working with refugees began when I enrolled in a community-based learning seminar during my undergrad at Franklin & Marshall College that explored the theory of citizenship while simultaneously resettling a refugee family in Lancaster, Pennsylvania. This is how I met the Cings, a Burmese refugee family, soon after they arrived from a refugee camp in Thailand. At first, I expected the family to be relieved to now reside in a more accepting country. What I discovered, however, was that living in the United States was a new and constant challenge that raised daily barriers to their economic and cultural integration. The father was resentful that he couldn’t find a job, the mother didn’t want to learn English, and the children were scared to begin school. Small things like getting a social security card were difficult and stressful to a family in a way that I had never contemplated. I realized that for the Cings, along with hundreds of refugees who would resettle in Lancaster that year, the stresses of resettlement went far beyond the trauma of fleeing persecution and spending a decade in a refugee camp. These obstacles restricted their ability to thrive and live the perceived “American Dream.” In spending time with the Cings and other refugees in the community, I became more involved in learning about the refugee experience as a whole. What kind of conflict caused people to flee?  What was living in a refugee camp like? What were some of the things that they wished were different about life in the United States? I then started volunteering with individuals who were studying for their Citizenship tests. In this experience, I learned about the arbitrariness of the test, but also the reasons that individuals wanted to become citizens.

During this time, I also began working with asylum seekers who were detained in prison awaiting hearings in front of an immigration judge. This is when I truly realized my potential to become an advocate for others through my ability to push against a legal system that I felt was failing human life. Because the government does not provide representation for immigrants and asylum seekers, I felt it necessary to advocate for those whose lives needed safeguarding against an overly complicated immigration system. I started with interviewing clients, learning about how to work with those who were suffering from PTSD, and putting together documentation about the conditions in the country from which they fled. This opened up my eyes to a whole new side of the system, and I realized the way I could truly make a greater impact was to go to law school.

TLS: Tell us more about Between Borders. What was your inspiration for creating it, and what should participants expect to gain from the experience?

I created Between Borders because refugees cannot solely be defined by a term. Most individuals in the United States who have heard the word “refugee,” or even those who work in some capacity with refugees, may not recognize the complexity of what that means. When we read about refugees on the news, we only think about the story that is being told in that moment – how they fled, or where they are coming from. But there is so much more to it than that. Every moment and step of the process informs each individual refugee’s life in a way that is important to understand, whether someone is an advocate for refugees, or simply a witness who reads about the migrant crisis in the news. In light of the most recent backlash against Syrian refugees, I felt it was necessary to create a greater understanding of the process as a whole and to give a glimpse into the life of some of these individuals. The goal of the project is to broaden awareness and understanding, and allow that to influence how we treat and understand other human beings. Refugees should not be defined as one group of people, or one region of the world. For that reason, Between Borders will feature Syrian and Afghani refugees who are fleeing persecution and living in a refugee camp in Jordan, but also Liberian refugees who have fled to a refugee camp in Ivory Coast. This reflects the fact that there are refugees fleeing in many different ways, from various different conflicts and situations of persecution, each with distinctive pasts. Every individual refugee is different, but the thing they (and we) all have in common is our humanity. I hope that this project can help tap into that humanity and to connect participants in a way that creates greater understanding of another human being.

TLS: Your Law & Public Policy profile describes an interest in policy-making on these issues. Can you tell us more about your work in that regard?

I have always been a firm believer in advocating beyond the immediate community in which you work. While I think getting my hands dirty in specific causes in my local area is essential to making an informed impact, I also think the United States needs national policy changes to the immigration system that go beyond the current executive action. While serving as a law clerk at the Department of Justice – Office of Immigration Litigation this past summer, I was able to learn about some of the gaps within the current immigration system, and the opportunities for forward-looking progress. I continued my education locally while working as a legal intern at HIAS Pennsylvania, a non-profit that provides refugee resettlement and legal services here in Philadelphia. Through these experiences working within the government and directly with clients, I sincerely believe that change is possible both within and outside of the legal system. I hope to be able to take my experiences working in the field of immigration and in my local community and apply them to policy in the future.

TLS: How has participation in the Law & Public Policy program impacted your work?

The Law & Public Policy program has been a springboard for much of my policy-oriented work in law school. As part of the LPP program, I wrote a paper titled The Benefits and Burdens of Prosecutorial Discretion: How to Fully Effectuate the Exercise of Prosecutorial Discretion in a Broken Immigration System. In this paper, I analyzed our current immigration system, and delved into policy recommendations for immigration reform, which can be accomplished in smaller steps as opposed to a massive comprehensive immigration reform bill. With the help of LPP Program Director, Professor Knauer, Between Borders is now the first major project put on by the program. We are thrilled LPP chose to sponsor and support the project.

TLS: Why did you choose to attend law school? Are your professional goals the same or have they changed? Will you return to the DOJ this summer or do you have a different position lined up?

I chose to attend law school in order to further my path as an advocate. I thought law school would be the perfect place for me to think critically and holistically about our immigration system in order to have an impact on policy in the future. I definitely think I was right about that. While policy is important, I also still care deeply about creating space for local community building, where individuals work together to achieve communal and peaceful solutions on a smaller scale. This can then provide momentum outwards to create peaceful solutions to prevent future conflict nationally and globally. I believe we should all strive for worldwide equality under the law, however idealistic that sounds. I think immigration reform is realistically achievable if it begins with a greater understanding of others’ humanity. I will be returning to the DOJ this upcoming summer to continue learning about the complexities of the immigration system and how I can best prepare myself to make a positive impact in the future.

Beyond Borders: A Refugee Simulation will take place at the National Constitution Center on Friday, March 25th, 2016. Participation is limited to the first 100 registrants.