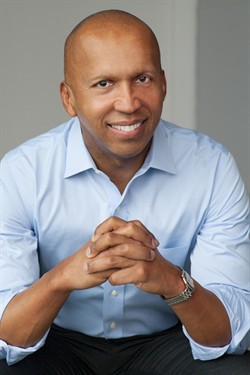 Stevenson is the founder and Executive Director of Equal Justice Initiative, a non-profit organization that provides legal representation to indigent defendants and prisoners who have been denied fair and just treatment in the legal system. He is the recipient of numerous awards, including the MacArthur Foundation “Genius” Grant and the NAACP Image Award for Best Non-Fiction, and was named one of Time’s 100 Most Influential People for 2015. Nobel Peace Laureate Desmond Tutu has called Stevenson “America’s young Nelson Mandela.”

Stevenson’s memoir, Just Mercy, was published in October 2014 to wide critical acclaim. Nicholas Kristof of the New York Times has called it, “A searing, moving and infuriating memoir . . . Bryan Stevenson may, indeed, be America’s Mandela. For decades he has fought judges, prosecutors and police on behalf of those who are impoverished, black or both. . . . Injustice is easy not to notice when it affects people different from ourselves; that helps explain the obliviousness of our own generation to inequity today. We need to wake up. And that is why we need a Mandela in this country.”

The Washington Post has described the book as, “Inspiring . . . a work of style, substance and clarity . . . Stevenson is not only a great lawyer, he’s also a gifted writer and storyteller.” John Grisham has also lauded the book, writing, “Not since Atticus Finch has a fearless and committed lawyer made such a difference in the American South. Though larger than life, Atticus exists only in fiction. Bryan Stevenson, however, is very much alive and doing God’s work fighting for the poor, the oppressed, the voiceless, the vulnerable, the outcast, and those with no hope. Just Mercy is his inspiring and powerful story.”

Copies of Just Mercy will be available for sale at the lecture, and Mr. Stevenson will hold a book signing after the conclusion of his remarks.

The Temple Law Foundation was formed in 1959 to bolster the school’s fundraising efforts and to expand the opportunities the law school offers to its students. Through decades of dedication and diligent fundraising, the Law Foundation has significantly increased the school’s endowment. Today, income from this fund is distributed annually for student scholarships, loan forgiveness for students working in public interest, and research grants for professors. The inaugural Law Foundation Lecture was presented in 2014 by President William J. Clinton.

The 2015 Law Foundation Lecture will be held on October 21st, 2015 in the Temple Performing Arts Center. Doors will open at 4:00 p.m. Self-paid parking will be available in the 15th Street lot and the Liacouras Garage. Click here for more information.