“Trial Lawyer.”  That phrase is an epithet, itself a word that can mean either an honoring description or a curse or slander.  For Richard Zitrin, it s a life-long calling, one nurtured in the arena of criminal law and the well of the courtroom and later improved with a parallel career of teaching ethics.  And TRIAL LAWYER is a multi-tiered text – autobiography, history of California trial law, a case-by-case-distillation of trial tactics and skills, a recurring invocation of both the ethical issues that arise in criminal (and some civil) litigation and the distinct personhood of every client. 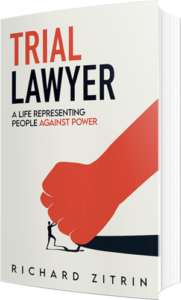 To put it mildly, this book grows on the reader.  Zitrin’s career in criminal law began in an unlikely place – participating in the defense of one of the men accused of murder and conspiracy after the death of prisoner/activist George Jackson.  https://www.blackpast.org/african-american-history/jackson-george-1941-1971/ .  The experience had a dual impact – it ‘radicalized’ Zitrin, making him painfully aware of racial and class injustice in criminal law, and it committed him to a standard of high quality representation for every client in every case in every courtroom.

Beyond being a personal story, TRIAL LAWYER is a primer on trial strategies.  It proceeds case by case, in each instance introducing the accused (and, later, at least one plaintiff) and then showing how knowledge of the law, cognitive biases of the prosecutors and/or judges, and careful and at times bold lawyering most of the time won the day.  Rich in its telling, TRIAL LAWYER also identifies the professional and ethical issues Zitrin – and anyone engaged in criminal defense – encounters and addresses.  And when Zitrin ventures into the world of personal injury and products defect litigation, it is the skill  and perseverance developed as a criminal defense attorney – and the recognition of the humility and connection required to engage and ultimately win over a jury – that lead to a triumphant victory.

TRIAL LAWYER is well written and becomes captivating as Zitrin’s career and skills advance.  It is a book worthy of a place on any litigator’s bookshelf, and could serve as a text for an advanced criminal trial advocacy course.

This is a book of reflections on the most compelling cases that I encountered during my life as a trial lawyer.  They’re mostly cases of ordinary people who found themselves in extraordinary circumstances, some of their own making, some caught in the web of society’s perceptions, many a combination of both.

The most apt words in that introduction are “life as a trial lawyer.”  That role defined Zitrin, and his many lessons are a gift to any who practice before the bench.  The reviews on the back of the book label him a “great storyteller” who wrote a book that left the reader “absorbed” and is “replete with gripping, heartbreaking and inspiring stories” that “la[y] bare” the “inequities of the legal system, particularly as they relate to race…”  All of these are accurate in this compelling work.