In December 2016, when reviewing the second edition of BASIC TRIAL ADVOCACY, I wrote the following:

NITA – the National Institute for Trial Advocacy – deserves great credit for providing [advocacy lessons] in a concise, reader-friendly form in TRIAL ADVOCACY BASICS (NITA, 2016) by Molly Townes O’Brien and Gary S. Gildin.    BASICS is an effective resource, whether the reader is embarking on a first trial, going to trial after a long hiatus from being in the courtroom, or is trying cases day in and day out but needs to take stock of whether regularity is the same as being effective (or whether there is some technique that could warrant rethinking).

With the release of the Third Edition, even more commendations are required. 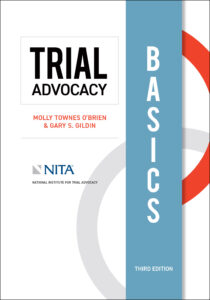 Why?  TAB 3d has the most comprehensive and up-to-date overview of brain science as it relates to persuasion of any recent advocacy text.  Other texts may talk about “script theory”  or the importance of primacy and recency, but O’Brien and Gildin devote a chapter to what is essentially a mini-tutorial in neuroscience and neurobiology – all in an eminently readable way.  As the book explains,

new and seasoned lawyers alike must align their advocacy with the latest window into the minds of jurors (and judges). The third edition of this treatise details breakthrough discoveries on how the brain operates and advises attorneys how take advantage of these discoveries as they craft their presentation of the case at each juncture of the trial.

There is much more.  TAB 3d integrates the phenomenon of remote advocacy – virtual trials and the like – across the text, offering essential insights.  It is also great to have an advocacy text with topics/wisdom such as

The book is tremendously practical.  Here, verbatim, is its list of grounds for objecting to the form of questions:

2) Multiple or compound questions. The judge should require lawyers to ask simple questions that are not confusing, bringing out one fact at a time.

3) Argumentative questions. Argumentative questions either assume or inquire about inferences that should properly be saved for closing argument. They may occur either on direct or cross-examination. Examples: “So, you have a good reason not to tell the truth today, don’t you?” “Which story is a lie? The one you told in court today or the one you told the police last March?”

4) Badgering a witness. The judge should stop any attempt to bully, mistreat, or abuse a witness.

5) Interrupting a witness. Interruption usually occurs during cross-examination. A witness has the right to give complete answers if they are responsive to questions. The opponent may object, “She’s not allowing the witness to answer the question,” or “She’s interrupting the witness.”

7) Misstating or mischaracterizing prior evidence. This prohibition is similar to the one against assuming facts not in evidence. For example, if the witness has testified that they were driving “about forty miles an hour,” the question “As you were speeding down the road, what did you see?” misstates the witness’s testimony.

9) Asked and answered. This objection asks the court to exclude evidence that is cumulative and a waste of time. Use it to prevent your opponent from getting witnesses to repeat their most favorable information over and over. If your opponent asks the witness to repeat, you may raise this objection.

10) Calls for a narrative. The trial process is premised on the assumption that lawyers will engage witnesses in an interrogative dialogue, drawing out each fact by asking a specific question. This process affords opposing counsel the opportunity to object before inadmissible testimony is blurted out by witnesses. Therefore, opposing counsel may object to witnesses giving their testimony in uninterrupted, narrative style. The narrative style is not objectionable per se, but may be halted in the court’s discretion.

Is there anything missing?  I for one would have welcomed more of a discussion on opening second, where a new story must be crafted and a push toward “slow thinking may be necessary.  And there are one or two statements that may need more explication.  For example, the authors write that “[a]s a matter of persuasion, however, the opening statement is the juncture of the trial where, knowingly or unknowingly, the jurors decide the case.”  This evokes the old saw that 80% of cases are won in the opening statement, a claim without hard data to support it.  I suspect that the authors meant that “the opening statement is the juncture of the trial where jurors create the storyboard frame that will help them organize the facts and shape them toward a favorable narrative and conclusion.”  But one or two sentences do not diminish an excellent teaching tool.

TAB 3d is the ‘real deal.’  For trial ad courses, for the self-learner, or for the practitioner who wants to improve their skill, this is a wonderful resource.