This book might be titled, alternatively, JUDGING JUDGES or JUDGES JUDGE THEMSELVES.  It is a text I was prepared to discount as self-serving – judges writing about some of the “hardest decisions they’ve ever made” according to the cover’s blurb.   I was wrong. 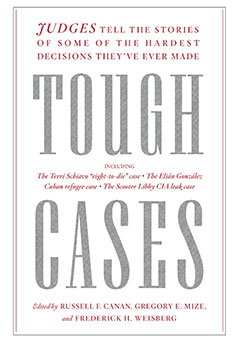 This is a mostly remarkable collection of essays, each from one trial-level judge recounting a memorable and truly difficult case.  Even though some are recollections of cases from well in the past, the detailed and clearly documented retelling overcomes the limits of memory.

The chapters range from the Terri Schiavo ‘right to die’ case, one in which a judge had to live in fear over the years of litigation; the high-profile trial of ‘Scooter’ Libby [perhaps the only chapter written more with clinical detachment than emotional]; or instances where troubled citizens and citizens in trouble – a person charged with grievous assault, a mother suspected of causing her child’s illness, a Native American drug seller whose crime made a judge have to balance the community’s inclination toward healing with the harm this crime wrought on a population often ravaged by addiction – came into a courtroom and tested a Judge’s commitment to law, justice and fairness.

The voices are varied, the lessons rich.  One judge acknowledges that in a state with an elected judiciary, the risk of loss of position that might follow an unpopular decision was a disturbing factor, one ultimately discarded but nonetheless reckoned with.  Another tells of meeting the child [now an adult] he ‘rescued’ from the dangerous mother a decade or more after the case, an encounter that affirmed the correctness of the decision in a case fraught with emotion and conflict.  And the story of a Native American tribunal and its balancing of traditional and statutory law is especially important, a reminder that the ‘American’ way is not the only way to restorative justice.

In the realm of public discourse there is often disdain for or misunderstanding of the role(s) a judge must undertake, and the hours, days weeks or even years a single case may require.  Occasionally the disdain is warranted, but usually not.  This ‘view from the bench’ is essential reading for those who wish to become judges; those who are but have yet to define their role and vision or who have become jaded and rote; and any citizen seeking to understand the Third Branch and the struggle good judges undertake to perform their tasks.