At the end of my 1L year, I knew what a complaint was, had learned some civil procedure, and had some abstract ideas of the difficulties disadvantaged communities face. After participating in the Social Justice Lawyering Clinic, I’ve written an actual complaint, figured out how to apply civil procedure to a real case, and helped an actual client get the money he was entitled to from his former employer.

In our first meeting, my client—who knew little English and brought his son to translate—explained that he was an immigrant from Pakistan who had worked at a gas station in Philadelphia. For the seven months he worked there, his employer paid him well below minimum wage. Worse, he was never paid at all for his final few months of work. He didn’t want to sue his former boss, but didn’t know what else to do.

At the time, I didn’t really know what to do either. However, my partner and I worked through the possibilities and began drafting a complaint. Writing this complaint was the first thing I did in law school that would have a real-world impact on someone’s life, which was just as valuable, and scary, as it sounds.

After filing the complaint, we heard nothing from my client’s boss for months. When we finally sent him notice of our intent to file for default judgement, his attorney called us. We then began the settlement process. I went back and forth with opposing counsel, negotiating a settlement offer for my client. Months later, right before it seemed like negotiations were about to break down, my client decided to settle. Though it was less than he could have gotten if he had won at trial, he came away happy with this amount. I’ll never forget when his son called to thank me for helping his father.

Through the Social Justice Lawyering Clinic, I was able to apply what I had previously learned in the classroom to represent a client through their whole case—from our first meeting in the Sheller Center all the way to settlement. Along the way, I gained the skills and confidence I’ll need to continue helping clients in the future.

Despite COVID-19 impediments, we have been fortunate to stay engaged with the larger community through the networks built by the Sheller Center for Social Justice. My interest in low-wage workers got me connected to the Coalition to Respect Every Worker (CREW). CREW is comprised of twelve different community organizations advocating for Philadelphians across various industries. In recent years, CREW has achieved significant victories for low wage workers, including most recently pushing for extended paid sick leave related to the pandemic. 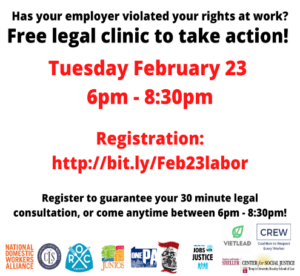 In December, CREW held their first Zoom legal clinic. I worked to organize  students to help with intake. The goal of the clinic was to both educate workers and ensure enforcement against employers who are violating the laws. Before the clinic, OnePA and Community Legal Services led trainings to teach us specifically about Philadelphia’s worker protection laws and how to work with potential clients coming from CREW’s member organizations. The clinic Zoom was set up such that organizers from CREW held Know-Your-Rights trainings in the main room, while the law students and other organizers met with workers individually in breakout rooms. Volunteer lawyers were available to field questions from the individual meetings and plan out next steps.

Although getting to apply the skills I am learning in law school was valuable on its own, the most impactful part of this volunteer opportunity was the ability to participate in a system where everyone had value. There was no sense that the attorneys knew more than anyone else. Instead, the community valued each individual’s skills, capacities, and needs. This sentiment was particularly apparent at the end of the clinic where all those remaining in the Zoom session—workers, organizers, lawyers, and law students—shared what we were taking away from the evening. Despite the diversity of voices and roles within the meeting, everyone offered some message of gratitude and solidarity. Participating first-hand in a setting where lawyers and clients work together in the pursuit of justice was truly powerful. I am grateful to the Sheller Center for Social Justice for this kind of learning opportunity, and I hope that many other students get the chance to work with our surrounding community. 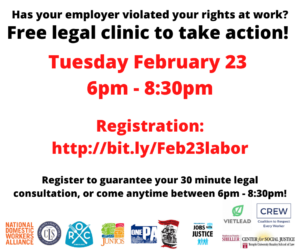 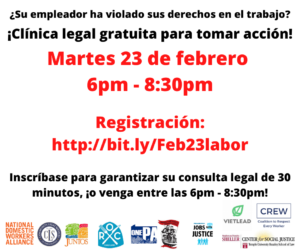 Students in the Sheller Center’s Social Justice Lawyering Clinic have produced “COVID-19 Q&A for Philadelphia Workers,” a fact sheet on unemployment compensation, federal benefits, sick and family leave, and other topics related to the pandemic. It’s available in the “Publications” section of our web site.

Today the Sheller Center released Enforcing Wins by Philly Workers: Transforming Laws on Paper into Real Change. The report focuses on how Philadelphia can make its worker protection laws more effective by improving their implementation and enforcement. The authors are Ryan Dickinson (‘21), Maria DiGeorge (‘21), and Kelly McGuire (‘20).

Over the course of the semester, the authors analyzed survey data from Philadelphia workers, collected by One Pennsylvania and Make the Road Pennsylvania, about their experiences with wage theft, sick leave, and work schedules. Further, they looked at what other cities are doing to more effectively enforce their worker protection laws. Philadelphia so far has fallen short of using its laws to protect workers, by failing to inform workers about their rights, help workers file complaints, and issue penalties against violating employers. The report recommends a series of changes, such as increasing staffing and funding, creating robust community partnerships, and engaging in the affirmative enforcement of worker protection laws.

Danielle Newsome, Temple LS ’15, was among the first students to participate in the Sheller Center’s programs. Now, she’s in charge of a brand-new unit in the Philly DA’s office that will focus on protecting the rights of Philly workers. You can read about the new unit, and Danielle’s impressive public-interest background, here. Congratulations Danielle!

Philadelphia has legal protections for low-wage workers on the books, including paid sick leave and an ordinance to address wage theft. The problem, however, is that these legal protections for low wage workers do not amount to much if they are not actually enforced. Representing the Sheller Center, Lily Austin (’20) spoke at a press conference at city hall about the need for sufficient funding, particularly to educate workers and employers about these laws. She explained how the city cannot sit back and wait for complaints to come. Rather, the city needs to work in active partnership with community groups, who already have the trust of these workers, by providing sub-grants to community-based organizations to educate low-wage workers. It must also work cooperatively with communities to proactively target employers or industries who are likely to be violating the laws. 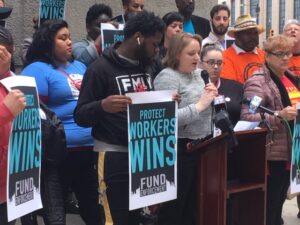 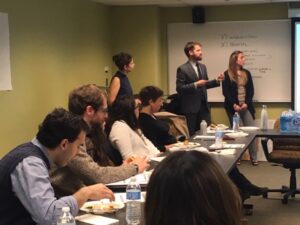 ether with the Pennsylvania Immigration and Citizenship Coalition (PICC), Heather Adamick (‘21), Joshua Lachewitz (‘21), and Pretty Martinez (‘21) from the Social Justice Lawyering Clinic organized a convening about creating a worker center in Philadelphia. A worker center would help organize, advocate, and provide services to low-wage workers in Philadelphia. Individuals representing sixteen organizations attended from across Philadelphia. The purpose of the convening was to present information about the many conversations that the students have had with various stakeholders and to hear from advocates about what sort of worker center would best serve the needs of Philadelphia’s low-wage workers.