Last week, Philadelphia City Council passed a resolution that recognizes all workers, regardless of immigration status. Sponsored by Councilwoman Helen Gym, the resolution continues the City’s tradition of welcoming immigrants, acknowledging the contributions of undocumented workers to Philadelphia’s local economy despite their exclusion from the lawful workforce under federal immigration laws. It also notes the increased risk of abuse and discrimination against undocumented workers. The resolution cites the Universal Declaration of Human Rights, which establishes the fundamental human right to earn a living without unjust exclusion and fair and safe workplace conditions.

The resolution is a major victory for the local organizing efforts of Popular Alliance for Undocumented Workers’ Rights (PAUWR). Just a couple of years ago, PAUWR was hatched as an idea from the kitchen of Ben Miller and Cristina Martinez, to fight for the rights of undocumented workers. PAUWR grew in strength and numbers by hosting a number of sold-out community dinners throughout Philadelphia. It will continue to do so by part 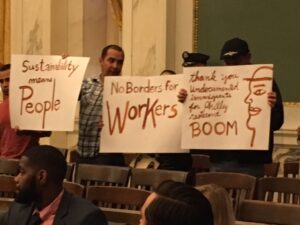 The resolution was drafted with help from Rebecca Daily (2L) and Ashley Rotchford (2L), law students at the Sheller Center for Social Justice, who worked with PAUWR as members of Temple Law School’s National Lawyers Guild (NLG). “This resolution is yet another example of how local jurisdictions can be inclusive of immigrants, despite the current federal climate that is hostile to both immigrants’ and workers’ rights,” says Rotchford.

For a news article on the resolution, click here.