Kameelah Davis-Spears, a Philadelphia parent, was stunned when her child was sent to a juvenile delinquency facility as the result of a fight in school. She got a second shock when, after his return home, she got a summons — for child support.

It turned out that the “child support” was money that she was going to have to pay the City to cover the cost of her son’s incarceration. Upset, she asked the City’s lawyer whether she should get legal advice. His reply, she said, made clear to her that she had better just start paying.

Fast forward through months of garnished wages, which put a hole in the family’s already-inadequate budget, to yesterday’s hearing before a committee of City Council. The hearing was prompted by the release of Double Punishment, a report by Justice Lab students Wesley Stevenson (3L), Kelsey Grimes (3L), and Sela Cowger (3L). With help from Prof. Colleen Shanahan, the students had conducted a months-long investigation on behalf of their client, the Youth Sentencing & Reentry Project. 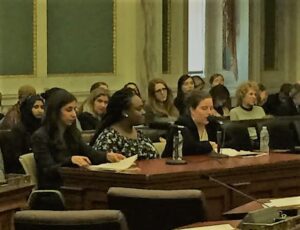 Wes, Ms. Davis-Spears, Lauren Fine of YSRP, and others testified before a crowd of parents, child advocates, City officials, social service personnel, Sheller Center supporters (including Steve and Sandy Sheller), and others. Council members, who clearly saw the practice as unjust, expressed appreciation for the students’ work.

And the hearing brought one more surprise: an announcement by Cynthia Figueroa, Commissioner of the City’s Department of Human Services, that the City will put an end to the practice. As the witnesses and Council members pointed out, that announcement is only a first step; making sure that collection efforts actually stop will take work. But it’s a victory — and, in an era in which fines, fees, and forfeitures are exacting double and triple punishment from poor families, it’s national (as well as local) news.

At the end of a long day, Prof. Shanahan delivered her own verdict: “I’m so, so proud of our students.” So are all of us at the Sheller Center.