At its Annual Awards Reception last week, the Philadelphia Project on Occupational Safety and Health (PhilaPOSH) presented Prof. Jennifer Lee with its Crystal Eastman award for the Sheller Center’s work on behalf of “the most marginalized and vulnerable workers in Pennsylvania.” PhilaPOSH  specifically noted the Center’s report, “Shortchanged,” which exposed wage theft in Pennsylvania and led to the enactment of a city ordinance creating remedies for wage theft. Students in the Social Justice Lawyering Clinic, Amanda Reed (’15), Andrea Saylor (’15), Maggie Spitzer (’15), Elyssa Geschwind (’14), and Solaris Power (’15), researched and wrote the report. 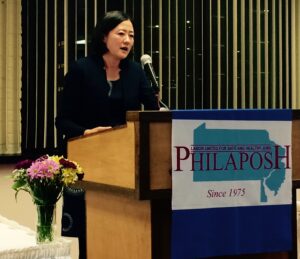 The award is named after Crystal Eastman, an activist lawyer who co-founded the American Civil Liberties Union and the Women’s International League for Peace and Freedom – and whose many accomplishments included writing a report that led to the first workmen’s compensation law.