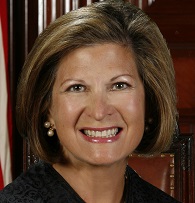 Judge Anne E. Lazarus was born in Brooklyn, New York. She received a Bachelor of Arts degree in Psychology from the State University of New York at Stony Brook in 1972. She received both her Juris Doctor (1976) and LLM in Taxation (1986) from Temple University Beasley School of Law.

Judge Lazarus served as Legal Counsel to the Philadelphia Orphans’ Court from 1980 to 1991 under the Honorable Edmund S. Pawelec. She also practiced law in the estates department of Ballard Spahr Andrews & Ingersoll, LLP in Philadelphia before being appointed to the Court of Common Pleas of Philadelphia County by Governor Robert P. Casey. Judge Lazarus was elected to a full term as judge in 1991 and served on the Philadelphia bench until 2010. During her tenure as a trial court judge, Judge Lazarus served in the Criminal, Civil Trial and Orphans’ Court Divisions. She worked diligently to increase pro bono service by the bar and, in 2005, was the first recipient of the Pennsylvania Bar Association Legal Services for the Public Committee’s Judge’s Award in recognition of her pro bono efforts. She was also a long-standing member of the Ethics Committee of the Pennsylvania Conference of State Trial Judges, serving as its Chairperson from 2005 through 2009; and served as Chairperson of the Pennsylvania Supreme Court’s Ad Hoc Committee, Judicial Canons of Ethics, 2010-2012. Judge Lazarus was appointed to the Judicial Conduct Board in 2011 and served as its Chair 2013-2015.

Judge Lazarus is a member of the American, Pennsylvania and Philadelphia Bar Associations. She enjoys teaching and has served as an Adjunct Professor at Widener University School of Law, Temple University Beasley School of Law, the National Institute of Trial Advocacy and the National Judicial College. She is also a frequent lecturer for the Pennsylvania Bar Institute, speaking on such topics as judicial ethics, Orphans’ Court practice and procedure and issues surrounding incapacity. She is active in the Temple American Inn of Court in which she is a past president, and the Louis D. Brandeis Law Society, which she served as Inaugural Chancellor, and is currently the President of the Brandeis Law Society Foundation. Judge Lazarus serves on the Board of Directors of Philadelphia Volunteers for the Indigent Program and was instrumental in establishing its “tangled title” assistance program.

Judge Lazarus was elected to the Superior Court in November 2009 and was sworn in as a member of the Court in January 2010. Her chambers are in Philadelphia. She is the first woman from Philadelphia to be elected to any statewide office.