The Sheller Center has filed a lawsuit against Pennsylvania Department of Human Services (DHS) claiming that it has unlawfully agreed to the continued operation of the family detention facility in Berks County. These agreements amount to an end run around the legal process for issuing a license that DHS must follow under Pennsylvania law for licensing facilities that hold children. 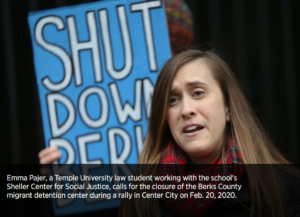 Emma Pajer (’20), who helped to draft the lawsuit, spoke at a press conference about the detention center. She told the gathered crowd yesterday, “[t]his lawsuit serves as a message that we won’t let DHS get away with not doing their job and ignoring their fundamental mission.”

While DHS initially denied Berks County’s license in 2016, that license has been tied up in an ongoing litigation battle for four years. Under Pennsylvania law, children cannot be held in a secure detention facility if they are under the age of nine or have not been alleged or adjudicated delinquent. By detaining migrant children – including children as young as three months old – the Berks County facility is operating in violation of Pennsylvania law.

In the meantime, Berks County applied for new licenses for 2017-2018, and 2018-2019. Instead of denying these licenses, DHS has simply stipulated to allow the facility to continue to operate under its 2016-2017 license. DHS’ actions have resulted in permitting Berks County to keep immigrant children locked in a facility, which the American Academy of Pediatrics states can cause psychological trauma and long-term mental health risks for children.