That was the view expressed by Xavier O’Connor, a 3L student in the Sheller Center’s Access to Justice Clinic, speaking before City Council yesterday during its consideration of an historic “right to counsel for low-income tenants” bill. 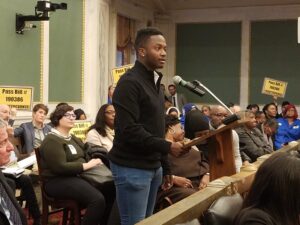 Xavier and colleagues Julia Sheppard and Sarah Kim have spent the semester researching why so many landlord/tenant cases in Philadelphia result in default judgments  — which then lead quickly to eviction.

Temple Law, as Xavier pointed out, has a front-row view of Philadelphia’s eviction crisis: “As a Temple student, I walk through a North Philly neighborhood affected by eviction every single day. I see the consequences of displacement and how our legal system dramatically impacts these neighborhoods.” 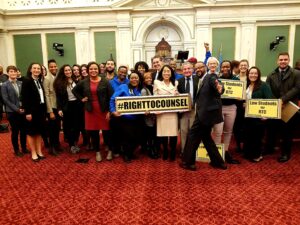 The unanimous passage of the bill by Council yesterday follows several years of work by legal advocates (including Temple Law graduates Rahsheedah Phillips and Barrett Marshall), the Bar Association, and many others — and will lead to further work, since phasing in legal services will require time, training, and funding. In these efforts, Philadelphia will be able to share ideas and models with a growing number of other cities, including New York, San Francisco, Newark and Cleveland, that have adopted similar legislation.

Xavier summed up the reason for getting involved: “The legal landscape we [as law students] are entering soon is unfair but it does not have to be. It should not be. And I am here today to advocate for its change.”