Our second “Social justice spotlight” of the semester is by John Farrell, 3L. The photo shows John at the press conference at which the Urgent Appeal to the UN Working Group on Arbitrary Detention was announced.

We, Mariya Tsalkovich, Anthoy Sierzega, and John Farrell, worked to challenge the U.S. government’s detention of families at Berks Family Detention Center in Pennsylvania, through the Sheller Center Social Justice Lawyering Clinic. Closely in conjunction with Juntos, a community-based immigrant advocacy organization, we helped to advocate for closure of Berks by arguing that these practices violate state, federal, and international law. Berks has been keeping children and families who seek asylum within the United States in prison-like conditions for potentially indefinite periods, violating their due process rights.

Over the course of our semester, we filed an Urgent Appeal with the United Nations Working 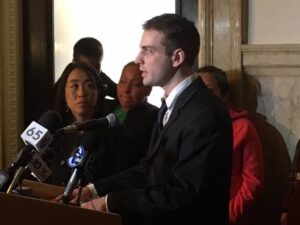 Group on Arbitrary Detention, co-wrote an Amicus Brief on behalf of psychological providers in the state litigation related to the licensing of the facility, and created educational materials to bring these practices to light. It was an honor to be a part of these efforts, working closely with seasoned practitioners and community members alike. We got to have a direct hand in advocating on behalf of some of the most vulnerable immigrants coming to the United States.